The Tohoku Medical Megabank is an organization striving to help reconstruct areas that suffered unprecedented damage from the Great East Japan Earthquake and Tsunami in March 2011. We will be closely working with the Ministry of Internal Affairs and Communications and the Ministry of Health, Labour, and Welfare on the construction of regional healthcare information exchange systems in disaster-stricken areas. Health surveys will be conducted, and participants will be notified of the results. Moreover, we will construct a biobank that links health survey results with biological analysis of samples provided by residents. In time, we will create a platform for drug discovery research and personalized medicine based on the outcomes of this Project. 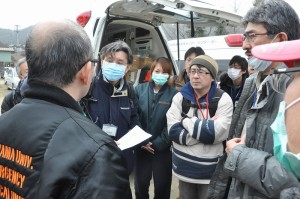 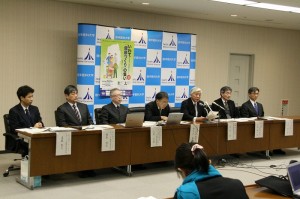 One of the goals of the Tohoku Medical Megabank Project panel under MEXT was to propose policies to MEXT, Tohoku University, and Iwate Medical University, with special emphasis on the analysis of a genomic cohort of 150,000 residents of disaster-stricken areas. The panel met a total of five times in April and May 2012 to discuss the project proposed by Tohoku University and Iwate Medical University. The panel’s remarks included the significance of the Megabank Project:

“As a result of this massive, unprecedented disaster [the Great East Japan Earthquake & Tsunami of March 2011], Japan suffered massive damage, and many precious lives were lost. The disaster was a painful experience, as exemplified by the fact that even now some individuals are forced to continue residing in shelters. Helping disaster-stricken areas to recover is a pressing issue. Thus, this Project [the Tohoku Medical Megabank Project] will organize medical personnel to disaster-stricken areas and help with health management using results from health surveys. In addition, cohort studies conducted by this Project will track the effects of the disaster on a large-scale in areas devastated by the earthquake and tsunami. Such efforts are unprecedented anywhere in the world. By the distinctive platform organized ahead of other regions of the country, the implementation of next-generation of medical care and the establishment of new industries in Japan will be initiated.”

These observations enabled MEXT to promote formulation of the “Tohoku Medical Megabank Project Roadmap” in September 2012. In order to receive expert and non-expert advice regarding Project implementation, a working group consisting of leading national experts compiled an interim report on relevant issues, such as support for community medicine, collaboration with genomic cohort studies, genomic and “-omic” analyses, ethics and legislation, bioinformatics, and fostering personnel in October 2012. Study plans in specific areas (local resident and three-generation cohort studies, as well as genomic and “-omic” studies) were formulated, and full-fledged implementation was scheduled to begin with a health survey in September 2013. In addition, Iwate Medical University and Tohoku University established a steering committee in May 2013 to facilitate robust collaboration between the two universities. 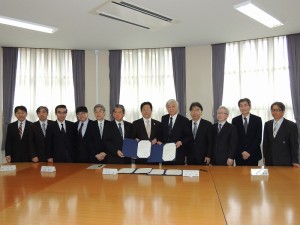 In July 2012, Iwate Medical University established the “Iwate Tohoku Medical Megabank,” which prepared for full-scale implementation through activities which support community medicine, genomic cohort studies, genomic and “-omic” analyses, and fostering personnel. The heads of 20 municipalities where health surveys would be conducted and bodies related to health administration were asked to cooperate with this Project. In addition, public relations campaigns have begun to explain the significance of the Project to residents via organizing symposia, as well as publication of bulletins and newsletters.

Since 2013, the Iwate Tohoku Medical Megabank Organization (IMM) has conducted the health survey in order to improve health of residents in disaster-stricken areas.

The Japan Agency for Medical Research and Development (AMED) was established in 2015. Since that time, the Tohoku Medical Megabank Project has continued under the auspices of AMED.

We, Iwate Tohoku Medical Megabank, will lead the restoration of medical services in areas stricken by disasters and create a strong foundation for the implementation and maintenance of community medicine.